The Strain of self-printing

To print or not to print? Enterprise City Schools in Alabama learns the hard way that buying Eureka Math® prin 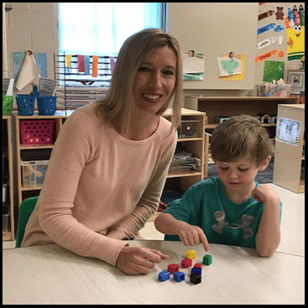 The PK–12 Eureka Math® curriculum, the updated and revised version of EngageNY Math, is an open educational resource available free online in PDF. Jessica Jeffers is a PD implementation support specialist at Great Minds® (the creator of Eureka Math) and a former math coach at Enterprise City Schools in Enterprise, Alabama. The district adopted Eureka Math in 2016 in Grades K–8 (4,500 students). Initially, Enterprise used the free Eureka Math curriculum files. But district leaders quickly saw how much time and money it was costing teachers to copy and distribute the materials. Jeffers led efforts to improve the process by self-printing the curriculum. She shared her experience with the Eureka Math team.

When Enterprise City Schools adopted Eureka Math, district leaders decided to save money by having teachers make their own copies of the curriculum’s free PDF files rather than purchase bound books from Great Minds. But it wasn’t long before teachers started complaining about how long it took to copy and collate the curriculum materials.

And rightly so, Jeffers says.

“Teachers have so much on their plate—running copies is not the best use of their time. We need our teachers planning how to meet the needs of their students, not standing at a copy machine.”

“IT WAS THE MOST DEMANDING TASK I HAD EVER TAKEN ON, AND IT REQUIRED COUNTLESS HOURS OF PREPARATION AND ORGANIZATION TO PULL OFF.”

Teachers weren’t the only ones with complaints. Parents found it hard to help their children with homework without a physical textbook, and students lost track of the loose lesson copies. In response to the latter concern, some teachers hole punched the lessons and organized them in three-ring binders. But the holes tore, and students frequently lost pages. Other teachers tried shrinking the lesson copies for students to paste in a composition book. That turned out to be another flop. The pasting wasted valuable instructional time, and at more than three inches thick, the composition books were a hassle for students to carry.

In response to these complaints, the Enterprise superintendent turned to the district print shop for help.

Before the print shop ran copies of the Eureka Math modules, Jeffers led an effort to organize the materials into workbooks and to establish a timeline to prepare them for the classroom.

“Four teachers from each grade level met for two days to pace and organize the curriculum by workbook,” she said. “We ended up organizing the workbooks by nine weeks and [printing each batch] nine weeks at a time.”

Initially, self-printing helped. But the printer soon couldn’t keep up with demand.

“The print shop was not prepared for the size or gravity of our print order, and workbooks were rarely delivered on time,” Jeffers said. “There were days when I had to pick up shipments and deliver them myself to try and expedite the process.”

Frustrated by the late shipments, many teachers wound up copying the materials themselves again. Teachers in two grades grew so frustrated that they ultimately opted out of the workbook for the fourth nine-week batch.

Although district didn’t purchase physical textbooks, the costs to prepare the materials were surprisingly high, and cost even more in wasted time and energy.

“It was the most demanding task I had ever taken on, and it required countless hours of preparation and organization to pull off,” Jeffers says. “It would have made everyone’s lives much simpler and saved the district a lot of hassle had we purchased the workbooks in the beginning!”

I'm interested in bringing printed materials to my school or district